History
Statesville was founded in January 1789 by an act of the General Assembly just after North Carolina joined the United States. The Statesville area was originally known as the Fourth Creek Settlement, named after Fourth Creek and was established as a "site for the courthouse and stocks."

The history of Statesville's name is vague, but it is believed to originally be named "the states vil." By 1790, the first courthouse, a log structure, was being built on a lot purchased from Fergus Sloan next to the Fourth Creek Presbyterian Meeting House, on an area that most of us have come to call "the square." The lots around the courthouse were soon sold at a public auction for other businesses, thus beginning downtown Statesville. The site picked for Statesville was in the midst of a settlement of Scotch Irish Presbyterians who had moved to the area, originally part of Rowan County, 30 to 40 years earlier. Some 2 miles north of Statesville was Fort Dobbs which was built to defend the forefront of civilization from 1756 to about 1764. It was considered to be the center of the district of the Revolutionary War. Statesville was incorporated as a city in 1847. 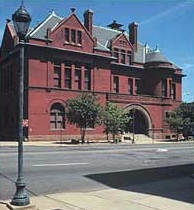 Fire
The first of many fires ravaged Statesville in 1855 destroying the majority of downtown's buildings. Most of our existing downtown was built around the turn of the century with the majority of building dating from 1860 to about 1930.

The first railroad reached Statesville in 1858, linking Salisbury to Asheville, and was known as the Western North Carolina Railroad. The Atlantic, Tennessee & Ohio Railroad (ATO) began serving the Statesville to Charlotte line shortly after the western service began. There were originally 2 depots for the 2 separate lines serving Statesville. Both were apparently burned down in the late 1800s during the Civil War and later rebuilt as a joint facility. On the morning of August 27, 1891, Statesville learned that a disaster had occurred when the Bostian Bridge on Buffalo Shoals Road became the site of a terrible derailment of a train. It was one of the worst tragedies to ever hit Statesville. There was great loss of lives in the wreck.
The Depot
The Depot, as we know it, also had a companion freight structure which was removed in the 1970s. The building, which was started in the winter months, had much controversy over its heating system. The local delegation of officials felt the structure and Statesville deserved a better system than pot bellied stoves, yet when it opened the next spring that is exactly what it had - three chimneys allowing for three stoves. The railroad brought Statesville's greatest growth period from the 1860s to the 1930s. The railroad brought finished goods for sale by our mercantile businesses, raw goods to be processed by our industries into finished goods, carried finished goods to be sold in other cities, and carried raw goods to be finished into salable goods in other cities. It also allowed our citizens to be connected to other parts of the civilized world and allowed visitors to come and visit our fair city and stay in one of our six hotels in downtown (McElwee Hotel, Carolina Hotel, Gray Cafe & Hotel, Historic Vance Hotel, St. Charles Hotel, and the Bristol Hotel). Statesville was no longer the forefront of civilization but an important part of the new civilized United States.

The Depot Hill area was also the site of one of the most famous hangings in the history of the region, Tom Dula! The Kingston Trio's song "Ballad of Tom Dooley" made the hanging famous. It was the story of a love triangle and a trial for murder which resulted in Tom Dula's (real name) death. He was hanged just south of the former Depot location and is buried in Wilkes County.

Industry & Architecture
Our industries around the turn of the century were based around 3 primary products: herbs, tobacco and liquor. The Wallace Herbarium on Meeting Street was one of the largest in the world and shipped processed herbs all over the world. Liquor and tobacco money built many of our fine downtown buildings. In fact, the Key Memorial Chapel - now the law office of Mr. Albert Walser, was built by Mrs. Key in honor of her late husband, Philip Barton Key. Another local church refused the money because it was made in the liquor industry.